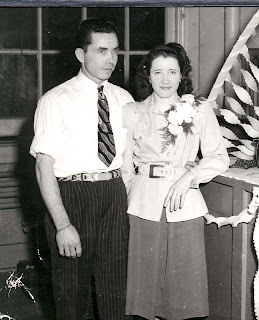 Ghosts...real or imagined? Anyone have an opinion on this?
I tend to lean toward the belief that they exist, in some form. It's the little girl in me, I guess.
I'm sort of inclined to go with the unaware ghostly scenes or replays people speak of seeing as more akin to time overlapping or crossing...like a wheel spinning in time...our present is the hub that all other times are linked, and sometimes the wheel spins either too fast or too slow. The spoke speeds get out of sync, some are slower and some are now faster and the faster ones overtake the slower ones, and for just a moment you get a look into the past, or maybe even the future.
That might explain a lot of sightings of oddities in the past. Imagine sitting around the chuck wagon on a bright night and suddenly you see a jet soaring across the sky? Hmmm, I see a UFO tale in the making.
Anyway, then I believe there are real ghosts, as in aware of you and its surroundings and they linger. Who knows why. Unfinished business, tragic death, the opinions are many.
Have you ever had a ghostly encounter?
I think I have. It was right after my dad died. For several days before and several after the funeral, I would get a sense that Dad was near and my dogs would suddenly just sit down and look up as if looking at someone standing over them, and they'd wag their tails.
The night after we buried dad, I was awaken by my phone ringing. I think it was about 1 a.m. When I answered it, there was nothing but static. I kept saying hello, hello, and then, just as I went to hang up, as if from very far away I heard my name. It was my Dad's voice! So, yes, I tend to believe :)
Now, on a purely promotional side...I'll be a part of a ghost program this October. Details below. Hope to see some of you there!
Writing about Bumps in the Night and Other Frights
Wednesday, October 19th, 2011 at 1:30pm
Gardner Neighborhood Library
137 E Shawnee Street
Gardner, KS 66030
In the spirit of Halloween fun, Kansas authors Lee Killough, Linda Madl, and Sheri L. McGathy discuss their fascination with the supernatural creatures, fantasy beings, and ghosts that inspired their writing. The authors will read from their works and answer questions about their writing and the things that give us all goose bumps.
Lee Killough is published in sci-fi and is known for her supernatural and urban fantasy mysteries. Linda Madl is published in historical romance and short stories, including several ghost stories. Sheri L. McGathy is published mainly in fantasy and has earned several awards for her work.
Posted by Sheri at 8:46 AM No comments: